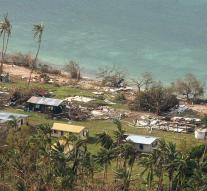 suva - The death toll from the cyclone Winston Fiji has risen to seventeen sure. That made local authorities said Monday. Sunday the number of casualties was still five after the worst cyclone that Fiji has ever taken.

The damage in the island nation in the Pacific Ocean is huge. Many of the 900 000 people are homeless and there is a lack of drinking water. A large part of the crop has been destroyed.

The country has declared a state of emergency for the next thirty days. All schools remain closed for the time being and until at least Monday morning is a curfew in force.

Large parts of the island kingdom are deprived of electricity, telephone and Internet. The Government of New Zealand has offered help. A C-130 air force of that country leaves during Monday with relief supplies and rescue workers on board to Suva, capital of Fiji.

Winston was a cyclone in the highest category and established a massive havoc. The storm was accompanied by winds of over 300 kilometers per hour. On the island of Koro was almost no single building standing. The storm changed direction at the last minute, leaving Suva was hit less hard than feared.