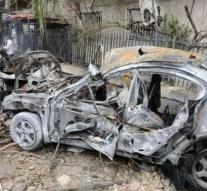 beirut - Despite a file proposed by Russia and Syria, the fighting continues in the Syrian East Ghouta. The Syrian Observatory for Human Rights reported on Wednesday that the Syrian army supported by militia has captured territory in the battles with the rebels.

Russia has proposed that the weapons be rested between 07.00 and 12.00 every day to give aid workers the opportunity to do their work and to let people flee. Tuesday there was a short period of rest but the fights have flared up again.

The government troops would have acquired an area in eastern East Ghouta. The message was not confirmed by the army command, nor by the rebels.

Russian Foreign Minister Sergey Lavrov accused the rebels on Wednesday of blocking humanitarian aid and evacuation of people. He did so during a meeting of the UN Human Rights Council. Lavrov said the Russia will continue to support Syria in 'defeating the terrorist threat'.

Lavrov also called on the countries of the coalition led by the US to provide assistance in the areas that they have under control.