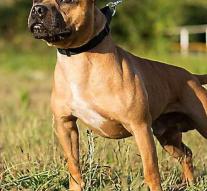 hannover - The police in Hanover think that a fighting dog killed two people. That reported the broadcaster NDR. The bodies of a 53-year-old woman and her 27-year-old son were found in a house in the city in the north of Germany on the night from Tuesday to Wednesday.

The fire brigade broke open the door and caught the dog. The fact that the beast is responsible for the deaths of both people is almost certain to the police, according to NDR Wednesday. The animal is housed in an asylum and is likely to be completed.