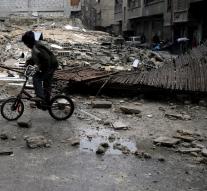 - Syrian rebels and the Syrian army near Damascus fighting each other, are about to arrange a cease-fire. Which has declared the Syrian Observatory for Human Rights Wednesday.

The parties fighting each other in the Ghouta area near the Syrian capital. The fighting pause lasts fifteen days starting on Thursday, according to the observatory.