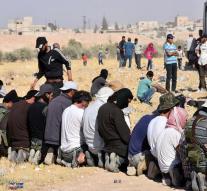 johannesburg - According to the United Nations, fifty migrants from Somalia and Ethiopia have deliberately drowned when they were forced into the sea by a human trafficker for the coast of Yemen.

The International Organization for Migration calls the incident shocking and inhumane. The bodies of 29 victims were found on the beach on Wednesday. The smuggler forced a total of 120 migrants into the sea.