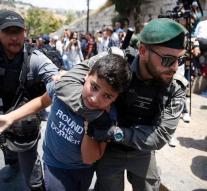 tel aviv - During nightly bombings with the police, about fifty Palestinians were wounded at the Temple Mount in Jerusalem. Fifteen of them were hit by rubber bullets, said the Red Cross Tuesday.

Background to the unrest is sharpened security controls for Islamic believers on the Temple Mount. Israel entered the controls on Sunday after a bloody assault at one of the entrances of the Temple Mount. On Friday three Israeli Arabs killed two Israeli police officers. The perpetrators were shot dead.

The Temple Mount with the Wailing Wall and the Al-Aqsa Mosque is a sacred place for Jews and Muslims. The struggle for visitor rights, over whom the hill is allowed to pray, has in the past arranged for tensions and violence.

The Fatah party of Palestinian President Mahmoud Abbas called for 'a day of rage.' 'Hamas and Islamic Jihad have also called for protests and clashes with security forces on the West Bank and Gaza Strip. The great power of Jerusalem, Mohammed Ahmed Hussein, criticized the introduction of metal detectors at security gates as a change of status quo.

Representatives of the Palestinians have repeatedly expressed the fear that Israel will gradually take control of the Temple Mount.