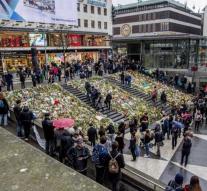 stockholm - The number of deaths in Stockholm earlier this month has risen to five. A sixty-year-old woman succumbed three weeks after the incident to her injuries, according to the Swedish police on Friday.

At the attack on April 7, a terrorist trucked a truck in a large shopping street of the Swedish capital on pedestrians and hit a warehouse. Four people came to the scene and fifteen people were injured. On the wheel was a 39-year-old asylum seeker from Uzbekistan. The man is still in custody.