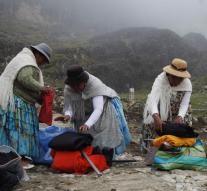 cochabamba - A bizarre accident has cost at least fifteen people a Bolivian way of life. Another ten others were injured, media reported from the South American country.

A truck with a load of peaches and a number of passengers in the cargo overturned during an overtaking maneuver near Cochagamba. Thus ended the fruit and passengers on the road, where just a bus came driving at high speed. Fourteen people died when they were run over by the bus full of travelers towards La Paz. The bus flipped according to a police commander back on a rock, causing the passenger was slain. Another three occupants of the peach truck and seven bus passengers were injured.

Winter is notorious when it comes to traffic deaths in Bolivia. Between October and March, most rain falls and the roads are poorly accessible, especially in the Andes.