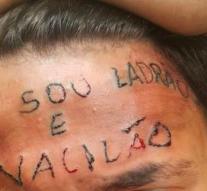 brasilia - The Brazilian police arrested two men who said the words 'I'm a thief' on the forehead of a teen tattooed. According to the BBC, the two suspects said the seventeen-year-old boy tried to steal a bicycle. The victim denies that.

The men aged 27 and 29 have known that they leave the message on the boy's head. That was meant to be 'punishment'. The police found the duo on the road by sharing a video on the internet to see how they tattooed the victim.

The victim said to local media that he stumbled in a drunk mood over the bicycle. Then the men bound him and took him with him. The video shows how the scared teenager is in a chair while the cameraman lets him know, 'This is going to hurt. ''

Sympathists have begun to take money for the teenager through the internet so that he can remove the tattoo.