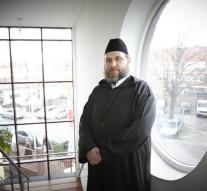 the hague - The controversial hater Fawaz Jneid, who opened an illegal mosque in The Hague, has imposed an area ban. The ban is also imposed by the Minister of Security and Justice and the NCTV, at the request of mayor Krikke.

According to Minister Stef Blok (Security and Justice), the imam announces an intolerable message. 'In this way he contributes to the radicalization process towards jihadism. And that in a neighborhood where there are great concerns about radicalization. '

Last week, the Telegraph revealed that the Syrian hatredmam, convicted of closing illegal Sharia marriages, ran a mosque under the book of a bookstore. According to the lease contract, this is not possible because only business activities in the property can take place.