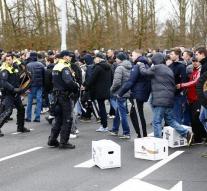 rotterdam - None of the Feyenoord supporters who demonstrated continued against the government in February this year. All cases were dismissed because there is no or insufficient evidence for a criminal offense.

That Mayor Aboutaleb written to the council, message RTV Rijnmond Monday. In total there were 312 fans arrested.

Fans turned during protests against the incumbent club board also against the police. Agents wanted to avoid the crowd would reach the Maasgebouw to De Kuip.