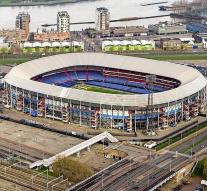 rotterdam - If it were up to Feyenoord Rotterdam city must open their wallets for a new football stadium on the river. The club, who still plays soccer at De Kuip, counting on a financial contribution to the stadium 40 million.

A fellow by Feyenoord caparisoned special project group will present next week the financial basis for the new stadium of Feyenoord and the associated development 'Feyenoord City.

The local injection of EUR 40 million is part of this. In exchange for that amount the Maas will soon be a shareholder in the soccer temple.

It is questionable whether this political support exists. A rather new plan was killed by construction giant Volker Wessels, when the city council refused to give a guarantee of 165 million.

Nevertheless, the city government in March has already put ajar the door. In a letter B and W asked when 'only' willingness to make a financial contribution 'if the stadium has a demonstrable social value for the area. 'From 'aid' can thereby be no question. To what extent Feyenoord can meet those conditions should show next week.\n  \n  \n   advertisement

The project group working on Feyenoord City, yet would not comment on a possible contribution of Rotterdam. 'Next Wednesday, we present all the figures, and that consistency,' says spokesman Leendert Bikker.

Soccer palace at the earliest in 2022 finished and is almost 400 million cost. With the entire Feyenoord City project, also with housing, is even worth approximately 1.4 billion euros.

Thereof must still be retrieved over a billion through private financiers and institutional investors. In order to get done Feyenoord City, the financial consultancy First Dutch hired. Or in addition to the municipality of Rotterdam all other lenders are in the picture, is still unknown.

Feyenoord itself will not own but want to rent the stadium on match days. What it gives the club is still in demand.

Feyenoord hopes there later on to have a sports budget, which transcends Ajax.