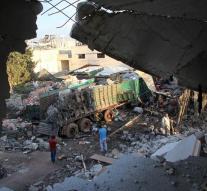 - "There are possible Monday fewer casualties than feared in an air raid on an aid convoy to the Syrian Aleppo. This said a spokesman for the Red Cross in Geneva Tuesday."

"He said that a coordinator of the Syrian branch of the Red Cross, Urem al-Kubra to life has come and also some civilians. But the death toll may be lower than feared. Observers of the Syrian Observatory for Human Rights reported previously at least twelve dead, employees of the Red Cross spoke on Twitter about thirteen deaths."