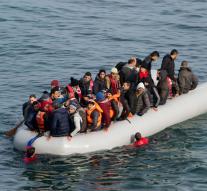 - The number of refugees reached the European Union via Turkey fell sharply in December. While in September and October daily nearly seven thousand refugees arrived via Turkey to the EU, was that in December 3731 on average per day.

Last week, less than two thousand refugees transited through Turkey, reported the German magazine Bild Thursday according to sources at the European Commission. The Turkish coast guard would have stopped the first two weeks of 4632 refugees who were trying to reach the EU.

Expected to present President Jean-Claude Juncker, European Commission figures Thursday during the meeting of European leaders in Brussels. The main topic of the summit is to make manageable the refugee crisis.