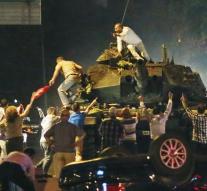 - The number of incidents by tensions between groups Turkish Dutch in recent weeks, declined significantly after the failed coup in Turkey.

The week after the attempted coup of July 15 there was a big surge. The Dutch police registered when nearly 75 reports and declarations, police said Monday. A month later, that number has fallen. Until August 11, the police recorded several dozen incidents.