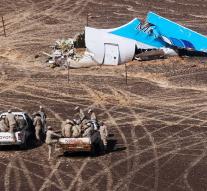 - The year 2015 probably goes into the books as the year with the least air crashes since 1946. This year fourteen crashed aircraft. The number of victims of road accidents with 186 historically low.

Reported Now. namely on the basis of data from Aviation Safety Network.

Attacks, such as the Russian aircraft over Sinai in Egypt, and wanton accidents such as airplane pilot who intentionally Germanwings crashed in the French Alps, are not included. With fleeing with it the number of deaths in air accidents comes to a total of 560.