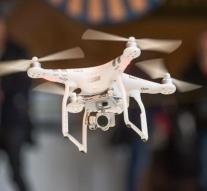 hilversum - The best drones of Dutch makers will be on September 8th on the first edition of the Dutch Drone Film Festival (DDFF) in Hilversum. With this aim, the initiators want to highlight the positive and creative aspects of these unmanned airplanes, which can provide a camera with images from the sky.

'Drones are often associated with danger and privacy violations,' says organizer Frank du Mosch of The Broadcaster. 'We want to show the other side. Drones broadly broaden the view of journalism and are in many ways a game changer.' According to co-initiator Wiebe de Jager of Dronewatch, we have only seen the tip of the iceberg when it comes to The creative possibilities of drones.

The festival takes place in the Vue cinema in Hilversum. The creators can win prizes in various categories. The DDFF is also the start of the Dutch Drone Festival, September 9 and September 10 in the Mediapark in Hilversum.