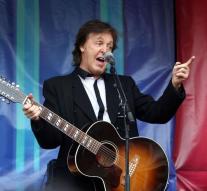 san francisco - Those who want to follow Jimi Hendrix, Buddy Holly, Paul McCartney or Kurt Cobain, can get help from the company that made their guitars. The famous Fender launched a guitar app, Fender Play, on Thursday.

Fender sells himself about half of his guitars to beginners. They stop almost all within one year. The little group who continues to master the guitar can then buy about six guitars per person. If fewer people give up hope, Fender can sell more guitars.

According to Fender, beginners can feel intimidated by instrument stores and music schools. Therefore, they buy guitars online and follow lessons through, for example, YouTube.

Fender Play focuses on those people. The 30-day launch period is free, after which the app costs $ 19.99 a month. The app uses well-known songs from U2, Rolling Stones and Foo Fighters to give guitar lessons.

The app is initially available only in Apple's App Store in the United States, Canada and Great Britain. Later, an Android version must also come from.