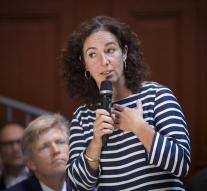 amsterdam - Femke Halsema stop Twitter. She is the 'barkers, bullies and other creeps' was saying that tweet more energy than it gives. That the former leader of GroenLinks Wednesday put themselves on Twitter.

Halsema opened her account in September 2009. She was then still in the House. Halsema has placed more than 26 000 tweets and was followed by more than 318 000 people.