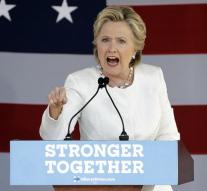 - With the publication of research papers, the FBI has drawn attention to an old investigation into a controversial decision by former President Bill Clinton. The documents are about the pardon that Clinton in 2001, on his last day as president, granted to businessman Marc Rich. Suspected of large-scale tax evasion, but was never prosecuted.

Although the documents according to US media not shed new light on the matter, the timing is salient. A spokesman for presidential candidate Hillary Clinton calls it a strange state of affairs. US media make a connection with the earlier communication from FBI boss James Comey that his service yet again examine emails from the Democrats.