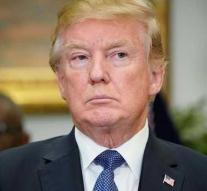 washington/oslo - The US federal police will investigate the nomination of Donald Trump for the Nobel Peace Prize. The Norwegian police have therefore asked the FBI, the Washington Post reported Thursday.

The Nobel Institute in Oslo announced this week that it had received a letter in which the American president was nominated for the peace prize. It must be falsified, because the signer denies having made that proposal.