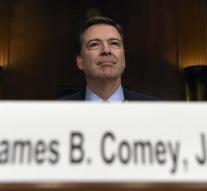 - FBI boss James Comey is possible under investigation after his revelation last week that the FBI has found emails possibly related to the scandal Hillary Clinton. It reports the Guardian.

The United States has a law that employees of the federal government prohibits influencing the political process: the Hatch Act. Which Comey violated due shortly before the election to come forward about the e-mails that were found in a study that is separate from Clinton.

A lawyer who served in the administration of George W. Bush wrote this weekend in an opinion piece that he had filed a complaint against Comey at the Office of Special Counsel, an independent agency within the federal government that investigates, among other violations of the Hatch Act. ' In general, the OSC starts an investigation when a complaint is received, '' said a spokesman, who did not specifically address questions asked by The Guardian about Comey.