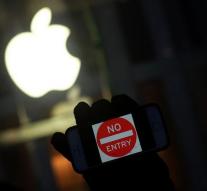 - The FBI and Apple appear again next week for the US Congress to make any separate statements about their disagreement about encrypting data. The FBI tried to persuade the tech giant weeks to crack the iPhone a terrorist. The company refused to cooperate. Ultimately, the Federal Police managed to crack the phone itself, to the dismay of Apple.

A committee of Congress showed Thursday (local time) know that Apple and the FBI appear Tuesday before separate juries to tell their story.

The case revolves around the encrypted iPhone 5c of one of the terrorists who shot dead fourteen people in San Bernardino last December and 22 others injured. Without Apple's software, the FBI managed to unlock the iPhone. The computer company wants to know how this is done, because there might be a security is in its products.