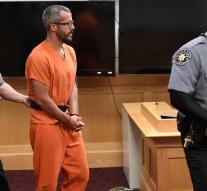 frederick - The man who killed his pregnant wife and two daughters in August disappears behind bars for life, turned out to be a court in Denver on Monday (local time). The perpetrator, Christopher Watts (33), has no chance of early release. To avoid the death penalty, he made a full confession earlier this month.

The case came into the news, partly because Watts made an emotional call on television shortly after the murders. Watts called viewers to help with the disappearance. A few hours after his dramatic call at Denver7, Watts admitted to the police that he had killed his family by suffocation.