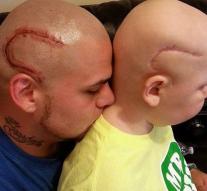 - A photo of a father who had a tattoo on his head so that his son was the only one with a large scar melt the hearts of thousands of online users.

Josh Marshall and his son, who is suffering from brain cancer, took part in a photo contest of the St. Baldrick's Foundation, a charity for children with cancer.

'I left the tattoo scar my son so that he gets more confidence,' he wrote in the photo.


The poignant image was chosen by more than 5,000 votes as best picture.