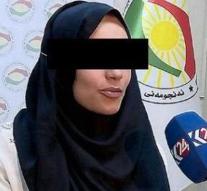 amsterdam - The father of the Islamic State of escaped Laura H. paid $ 10,000 to free her from Iraq. He said Saturday in an interview with NRC Handelsblad.

Laura H. traveled with her husband and children in 2015 to the IS stronghold Raqqa in Syria. From there, she landed in the Iraqi city of Mosul, where they escaped from summer with her children last year. Upon arrival at the airport she was arrested on suspicion of involvement in a terrorist organization.

During her stay in the IS field her father came in contact with a private German foundation, which managed to arrange Laura's liberation fee of 10. 000. The Dutch government does not contribute to the recovery of jihad.