Home / World / 'Father of the Zombiefilm' has passed away 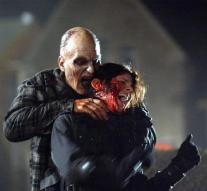 los angeles - The American director George A. Romero died on the effects of lung cancer at the age of 77 in Toronto on Sunday. Romero is seen as the 'father of the zombie movies'. His first movie, Night of the Living Dead, from 1968 shocked cinemas around the world.

With the film, Romero made the zombie genre in one blow popular. He inspired several directors by letting his first zombies bleed and apathetic through the image.