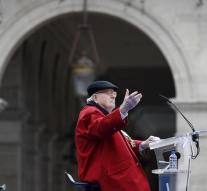 paris - Jean-Marie Le Pen, the former head of the Front National (FN) said Sunday evening at the French radio station RTL that his daughter and successor as party leader 'lost the presidential elections because of her position on pensions and the abolition of the euro.'

He also criticized Florian Philippot, the right hand of Marine Le Pen. 'Partly through him, the Front National has lost the elections. 'Said the retired politician. Philippo called the outcome in turn 'a historic success. '