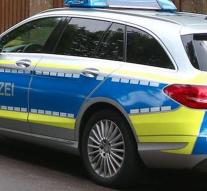 altenfeld - At a family drama in Germany, a father probably killed two of his children aged 1 and 4. A third child of 3 years old is still at risk.

What has just happened, the police could not say Thursday. According to Bild, the mother found the children after she came home after hospitalization. The father is also severely injured in the hospital. What his motive was is still unclear.