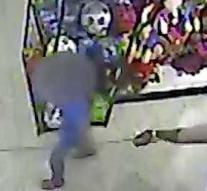 worcester - A forty-year-old father was sentenced to a prison sentence of sixteen years after a bizarre acid attack on his very own three-year-old son.

In July 2018, the man threw an acid liquid from a battery over his son, who suffered severe burns in his face and on his arms. To protect the identity of the child, the name of the perpetrator is not released.