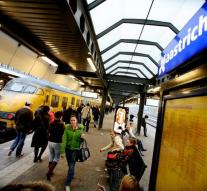 rotterdam - The Netherlands is making work faster rail connections with Germany and Belgium.

A direct train between Liege, Maastricht and Aachen is possible, now an important railway line between Heerlen and Landgraaf is doubled. Over there is the Ministry of Infrastructure Tuesday agreements with regional directors during an international railway conference in Rotterdam.

The province of Limburg and the Ministry jointly invest 58 million euros in the expansion of the railway.,, This paves the way for improved international connections in the region and will soon be faster train, 'said the spokeswoman.


Rail Carriers make according to its plans for a three-country train that connects Limburg with Germany and Belgium. State Secretary Dijksma:,, Travel in the border region is thus easier. From 2018 would train passengers will no longer have to move in Heerlen and Maastricht. '

Is also being investigated for other cross-border train routes, such as from Groningen to Bremen. According to the European Commission, there are tens of billions made available for efficient transport in Europe, both passengers and freight.

For example, the goods Betuwelijn extended to Germany. But also tackles the train route from Eindhoven to Dusseldorf. The goal is more intercity and high-speed lines and relieving traffic, said Commissioner Bulc yesterday at the conference in Rotterdam.