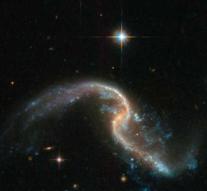 berkeley - Scientists have ever discovered the furthest star. It stands at no less than 9 billion light-years away from the earth. Until now, there were complete galaxies and supernovas (exploding stars) seen at such distances, but no individual, normally shining stars.

Individual stars can no longer be distinguished from a distance of about 100 million light years. The light is not bright enough for that. That it is now possible is due to the help of galaxies that stand between the star and the earth. They worked like a sort of magnifying glass and 'enlarged' the star more than two thousand times. That light was captured by the American-European space telescope Hubble.

The star has been given the scientific name MACS J1149 LS1, but the discoverers prefer to call it Icarus. It is a so-called blue super giant. Such stars are much larger, heavier and hotter than our sun, and they can shine a million times as brightly. The discovery is in the scientific journal Nature Astronomy.