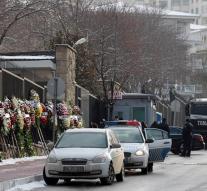 The farewell meeting was at the Foreign Ministry in the Russian capital. TV images showed how Putin and Foreign Minister Sergey Lavrov laid flowers at the open coffin with the body of the ambassador.

Turkey showed Thursday the family free from the policeman who robbed Karlov Monday of life. Police had the mother, father, sister and two other family members of Mevlut Mert Altintas taken for questioning. The gunman was shot dead after his act itself.