Home / World / FARC: peace agreement in danger due to detention 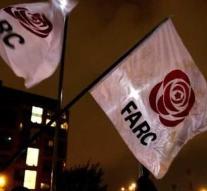 bogota - The former FARC rebels in Colombia have fiercely reacted to the arrest of one of their former leaders. 'With the arrest of our comrade Jesus Santrich, the peace process is at the most critical point and threatens to lead to a real failure,' said FARC politician Ivan Marquez against journalists.

Santrich, whose real name is Seusis Hernandez, negotiated for years on behalf of the guerrilla movement with the government. After more than half a century of battle, the FARC finally put its weapons down and continued as a political party. Santrich is now in a Colombian cell because, after signing the agreement, he would have been involved in drug smuggling to the United States.

The former rebel now hangs out extradition to the United States. He remains according to the authorities in custody until the extradition request has been formalized. FARC politician Marquez warned that extradition would be a violation of the agreement with the guerrillas.