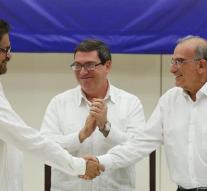 - After negotiations four years, the Colombian government and FARC reached a peace agreement. Representatives of Cuba and Norway were present at the negotiations were officially released.

Colombia holds an October 2nd referendum on peace with the FARC. The population must take a decision on the peace agreement in which the Colombian government and the rebels have negotiated in the Cuban capital Havana.

A senator who participated in the talks, said Wednesday that the treaty will be signed in late September. Provided the population agrees, there will finally end the conflict, which half a century ago broke and in total has cost more than 220 000 lives.

Party in the streets of Bogota during the live broadcast of the peace talks.

Ferme after talks on the final details both camps came out last Tuesday according involved. In June, the Colombian government and the FARC A historic agreement in which the rebels renounced violence.

Colombian President Juan Manuel Santos received a call from Barack Obama congratulated him after publication. According to the White House sees the president,, this historic day '' as a critical moment,, '' in a long process to implement the peace agreement.

The Secretary-General of the United Nations welcomed the agreement. Like Obama Ban Ki-moon stressed the importance of bringing into effect of the agreement.,, We will stay on the side of Colombia on his way to a peaceful future, '' he told an endorsement.