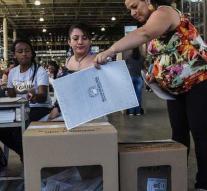 bogota - The FARC came out of the parliamentary elections in Colombia on Sunday as the big loser. It was the first time that the former 'narcoguerrilla' participated in elections and barely won any votes.

The FARC (Revolutionary Armed Forces of Colombia) established in the mid-sixties as an extreme leftist movement is hated because of the terror and drug crime that kept the movement alive in the jungle for a long time.

The FARC participated for the first time as a political group thanks to last year's peace agreement and only achieved 0.3 percent of the votes. Yet the movement gets ten seats, because that has been agreed in the peace agreement.

Right-liberal opponents of the agreement gained a victory with their party PCD from ex-president Alvaro Uribe. The PCD became the largest party with more than 16 percent of the votes.