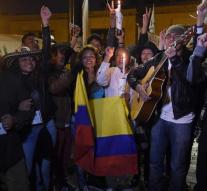 havana - The Colombian government and FARC reached a new peace agreement. Which reported negotiate mutually Saturday after six weeks, after the first agreement was rejected in a referendum.

' We call throughout Colombia and the international community (...) To support this new agreement and its rapid implementation, so that we can let the tragedy of war behind us, '' reads the joint statement. ' Peace can not wait any longer. ''

The government closed earlier a peace agreement with FARC. President Juan Manuel Santos earned him the Nobel Peace Prize, although the population has rejected the agreement narrowly because the rebels too easily would come off.

It is unclear whether the Colombian people should vote again on the treaty to end 52 years of war in Colombia that were killed an estimated 220 000 people.

The approximately 7,000 rebels of the Revolutionary Armed Forces of Colombia (FARC) were under the old agreement lay down their arms in exchange for a return to society. The movement will continue as a political party.