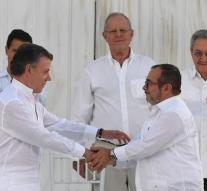 bogota - The Colombian government and the guerrillas of the FARC sit again at the negotiating table to reach a peace agreement. This is necessary to get out of the impasse that arose after the Colombian population voted in a referendum against an earlier agreement. On that was negotiated four years, but a majority of citizens found the conditions too mild for FARC members.

The head of the leftist guerrillas, FARC leader Rodrigo 'Tymoshenko Londoño Echeverri, wrote Saturday on Twitter that the parties are optimistic.

In mid-October was Colombian President Juan Manuel Santos have announced that the cease-fire between the two parties has been extended until the end of the year. Santos: 'There are both in the army and the guerrillas young people hope they never have to fire a shot. Reason for me to renew the agreement. '

The Government of Colombia also begin peace talks with the ELN, the smaller of the two guerrilla organizations in the South American country. The negotiations are conducted in Ecuador.