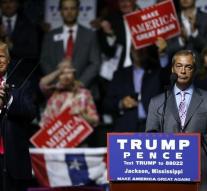 london - ' Contrary to media reports, I am in England. 'This tweet the controversial British politician Nigel Farage denied that he would be in the United States to coach the Republican presidential candidate Donald Trump for his second debate against his Democratic rival Hillary Clinton.

A spokesman for the UKIP Party in England denied the reports too, but could not say whether Farage in the near future would travel to America to help Trump on his campaign. Farage himself alluded to them in his farewell speech at the UKIP conference, where he said he did not rule out returning to the US to help Trump. The two conservative politicians had already met in August in Mississippi.

Farage is known for his sharp debate technique and provocative texts, in particular immigrants. He was regarded as the figurehead of the Brexitcampagne. After the referendum in which the British voted for a departure from the EU, he stepped down as leader of the Independence Party.