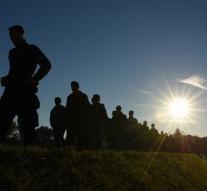 - The number of refugees entering Germany has more than halved in December from November. This show Monday published statistics from the German Federal Police. The sharp decline in the number of migrants was probably caused by bad weather on the Mediterranean.

This month until December 20 about 73 500 migrants arrived in the Federal Republic. In the first twenty days of November were that 170. 000. Moving to an estimated 6,000 migrants are expected to Scandinavia. That means for Germany accretion of about 68. 000 refugees this month to date.

In Germany this year already received over a million migrants.