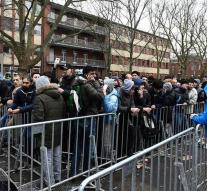 - Far fewer asylum seekers have arrived in Germany in the first six months of 2016, partly due to more stringent rules and the closure of borders in other European countries. This was announced by the German Interior Ministry Friday.

In the month of June is still registered as asylum seekers 16. 000 people, compared to 92 000 in January. Total reported from January to June, more than 222 000 people applying for asylum in Germany. However, the migration crisis is far from over, think Interior Minister Thomas de Maizière.,, I would not dare bet that the coming months will remain so, '' said the minister.

Germany caught last year more than one million migrants. This mainly went to refugees from conflict zones such as Syria, Iraq and Afghanistan.