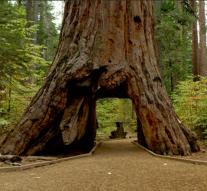 sacramento - One of the most famous trees in the United States collapsed after heavy rain storms.

The huge Seqoia in Calaveras Big Trees Nature Park was a popular destination for tourists because a tunnel was made by the tribe. The hole was so big that a car could drive through and was carved 137 years ago.

The last storm, the worst in a decade in the area, the more than thousand year old tree was eventually fatal, the park announced on Facebook.

California and Nevada are the last days affected by unusually heavy rainfall. As a result, though many trees toppled.