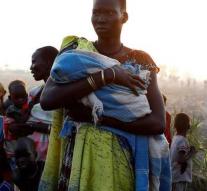 geneva - For 155,000 people in South Sudan, a famine threatens to occur within a few months. A disastrous situation arises for them between May and July, according to a study by South Sudan and the United Nations on Monday.

According to the report, 5.3 million people, about half the population of the young country, already live in 'crisis' or 'emergency.' 'These are the third and fourth scale of five, the last being' famine '.

The oil-rich country has been torn apart by a civil war since 2013. Four million people fled their homes, creating the largest refugee crisis in Africa since the genocide in Rwanda in 1994.