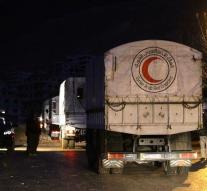 geneve - The famine in the besieged Syrian city of Madaya drives the prices of food enormously. Rapporteurs of the United Nations report that one minor biscuit converted 14 euros must be spent. For a kilo of baby milk powder must be paid already 287 euros.


The prices skyrocketing, while the UN last week managed to get two convoys of trucks carrying food into the city. Despite recent days again some people died because of lack of food, according to the UN.
In Madaya stay approximately 42 000 people living in appalling conditions. Every city is fought by Islamic State, rebels and government forces in Syria. The United Nations and the Syrian Red Cross have so far only ten people can evacuate from the city. Fifty people did on their own strength to leave the city.
NEW