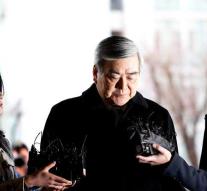 seoul - Justice in South Korea has issued an arrest warrant against the wife of top manager Cho Yang-ho of Korean Air. According to the judiciary, the 69-year-old Lee Myung-hee has misbehaved miserably several times over the past seven years against personnel and thus misused her position.

A guard, for example, was sent a pair of pruning shears to his head because he would not have guarded the door properly, reported Yonhap news agency. A driver got a few kicks from the roaring Lee in the middle of the street because he would have made a mistake.

Construction workers who worked on a hotel extension were insulted and insulted for unclear reasons. Justice has formulated seven charges against the woman.