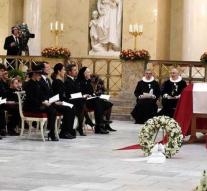 - In the Christiansborg Slotskirke in Copenhagen, family members said goodbye to Prince Henrik during a memorial service. Some 60 family members, friends and official representatives came to the intimate funeral of the husband of the Danish queen Margrethe.

At half past ten the first guests arrived, while in the whole country the church bells rang. Margrethe was the first to enter the church, followed by her sons and daughters-in-law. At the end of the ceremony, led by Bishop Svendsen, Danish guards carried the coffin with Henrik's body outside. Under the watchful eye of the royal family, the coffin was carried in a hearse.

Henrik is cremated and not, according to royal custom, buried in the St Birgitte chapel of the cathedral of Roskilde. His axis will, as he wished, be scattered into two parts: in the sea and in the private garden of Fredensborg Slot. The funeral thus breaks with a more than six hundred year old tradition. Henrik and his wife Queen Margrethe were supposed to have their final resting place in a glass sarcophagus in Roskilde, but the Danish court announced last year that Henrik had decided that he no longer wanted to be buried in Roskilde. This he decided out of dissatisfaction with his subordination in the royal house, where he came protocollair after his wife and son crown prince Frederik, and not granting the title 'king consort'.

In recent days, the Danish people have been able to pay the last honor to the prince who died at the age of 83 last week. The church of Christiansborg Slot in the center of Copenhagen was opened to the public, which could walk along the closed coffin. Thousands of Danes have made use of this possibility. The French family of Prince Henrik, including his younger brother Etienne de Laborde de Monpezat and his sister Catherine de Monpezat, came to church.