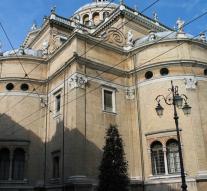 Especially for the occasion, the king today travels back and forth to the Santa Maria della Steccata, the monumental church where the family tomb of the Bourbons de Parme. The baptized father still carries the title Duke of Parma and Piacenza. He is the eldest son of Princess Irene and Prince Carlos Hugo de Bourbon de Parme.

Prince Carlos was previously unacknowledged son Hugo Klynstra, who now still can call Prince de Bourbon de Parme. But he's not in today, as King Willem-Alexander to strengthen links with his aunt Irene and her children and grandchildren.