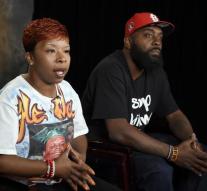 ferguson - The family of the teen shot Michael Brown in 2014 has received a compensation of over 1.3 million euros. The family's lawyer announced that Friday, reported US media.

The eighteen-year-old unarmed black boy was shot dead in Ferguson near St. Louis by white agent Darren Wilson in 2014. After months of investigation, the authorities decided not to prosecute the agent. The incident caused months protests in Ferguson and elsewhere.