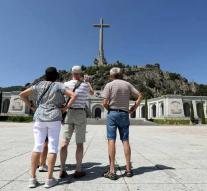 madrid - The family of the Spanish dictator Francisco Franco (1892-1975) opposes the plan to move the remains of the general. In a statement, seven grandchildren indicate 'under no circumstance \u0026 # x27; \u0026 # x27; to cooperate with that. They will use all legal possibilities to prevent excavation, report Spanish media.

The remains are in a monumental church in a complex known as the Valley of the Fallen. Franco had the church built as a monument for all the fallen from the Spanish civil war (1936-1939). However, the monument is controversial because Franco himself is buried there.

The Spanish government announced this week that a decree has been issued and that the procedure for relocation has been set in motion. The parliament still has to agree.

Where the mortal remains must go is not known. According to the deputy prime minister, the family can speak about this in the middle of next month. The mayor of Franco's birthplace Ferrol has already announced that his congregation does not want the remains.