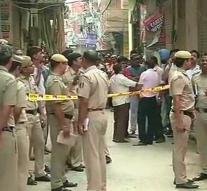 new delhi - In a house in the Indian capital New Delhi early Sunday morning the remains of eleven members of a family were found. The Times of India reported that some killed members of the family were hanging on the ceiling and blindfolded.

Others lay blindfolded on the floor with tied arms and legs. The remains are from seven women and four men. Among them were three teenagers.

The family had a greengrocer's shop and was active in the timber trade. The police take account of collective suicide.